In 2016, the world suffered $175 billion USD in economic losses as a consequence of natural disasters. As illustrated in the infographic, the Americas and the Asian continent incurred the majority of the absolute loss in the years between 1994 and 2015, each region set back by $870 billion and $709 billion respectively. To view the full infographic, click above.

The most affected country in terms of financial losses caused by disasters in 2016 was The United States, facing $24.9 billion USD in damages. China reported a loss of $13.7 billion USD, the United Kingdom $3.6 billion, and India $3.3 billion. 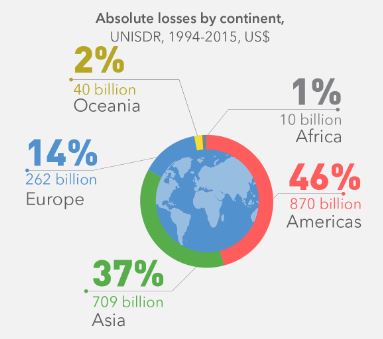 In the decade between 2003 and 2013, 21% of global economic damages in the agricultural sector were due to disaster, resulting in a loss of $30 billion worldwide. Such losses can have the greatest impact on farmers, 95 million of whom are still uninsured.Of those who have insurance, only 6% are purchasing coverage voluntarily. Such lack of protection becomes critical during flood seasons, as this type of disaster accounts for 60% of crop damages over the recorded decade.

Of the parties to the United Nations Framework Convention on Climate Change (UNFCCC) created in 2015, 80% included agriculture in their mitigation framework.

64% of the parties also reported that they include agricultural concerns in their climate change adaptation strategies. These commitments demonstrate a shift of the international community towards sustainability and resilience.

Over 300 decision-makers will gather at the Global Disaster Relief & Development Summit in Washington D.C. to discuss economic and agricultural impact of disasters and revise objectives for disaster intervention, including the use of new financial instruments to accelerate resource mobilization and deployment.

Join senior representatives from government and UN agencies, NGOs, development banks, military and the private sector to exchange best practice and take part in the debate on how to manage climate-related disaster risks more effectively. Hear from:

And many others. See the full list of confirmed speakers at http://disaster-relief.aidforum.org/speakers

For more information about the Global Disaster Relief & Development Summit, visit disaster-relief.aidforum.org or get in touch with Alina O’Keeffe, Head of Marketing at marketing@aidforum.org